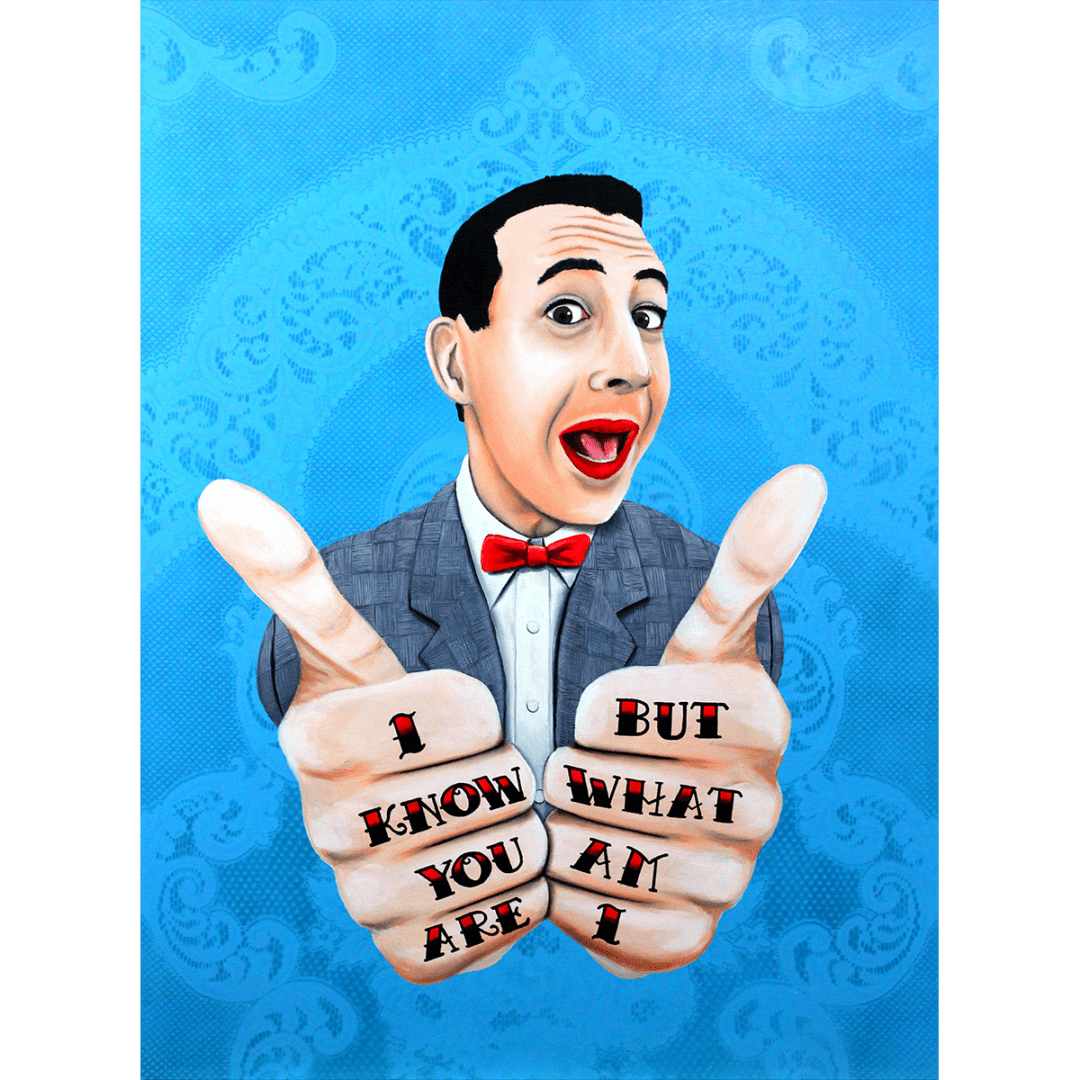 Pee Wee I Know You Are But What Am I

My “KNUCKLE TATTOO” series started with the “Michael Jackson Thriller” painting idea. I grew up listening to Michael Jackson and remember when the thriller video came out and shocked the nation. It was ground breaking and to this day still holds up.  I wanted to do a zombie piece and while coming up with ideas and thinking about how a stereotypical zombie walks with his hands out into the foreground of the image it came to me. “THRILLER” fits on the knuckles and I could do that in the same lettering as the video.  I hand cut this image as a woodblock print, because that was the medium I was currently working with in College.

The second “knuckle tattoo” piece was an oil painting of HARRY CARAY “CUBS WIN!”  I thought about how Michael Jackson doesn’t really have any tattoos or at least not know for any and the idea of putting “knuckle tattoos” on famous people without tattoos sounded fun.

For this one first you must know I was born in Illinois and was the rebel Chicago Cubs fan in a family of all Cardinals fans. I think it was the rebel artist in me that just didn’t want to have to like what I was told or what everyone else liked. I wanted to do a cubs painting but never really knew how to make it my own and different than all the dumb sports art that you always see. I also really liked Harry Caray’s boozy persona and how Will Ferrell did him on SNL and ended the skits with saying “cubs win” “cubs win”.  All of these ingredients led to my second/first Knuckle tattoo painting! The series has now evolved into many iconic pop culture and sports figures and strayed away from being about non-tattooed people but just the perfect word or words and lettering.

I also don’t have any tattoos. I really like and appreciate them, but have commitment issues and get tired of things easily.

ARE YOU NOT ENTERTAINED (when in Rome) S/N Print

IT WAS ALL A DREAM (DREAM BIG) Unisex T-Shirt

ARE YOU NOT ENTERTAINED (when in Rome) giclee

Pee Wee I KNOW YOU ARE Unisex T-Shirt

Day Of The Dead Sticker Pack

PEE WEE I KNOW YOU ARE BUT WHAT AM I… PRINT

BILL AND TEDS EXCELLENT TRIP TO THE BEACH giclee

Eye of the Beholder Skateboard Deck

Amber is the Color of Your Energy

It Was All A Dream (Dream Big) Giclée

In Loving Memory of My Memory Giclée

Pee Wee I Know You Are But What Am I Giclée

Day of the Dead Ocean Giclée

Day of the Living Giclée

Day of the Dead Marijuana Giclée

Why Can’t We All Just Get Along Board Print

Why Can’t We All Just Get Along Board Giclée

Death of Twinkie the Kid Giclée

Stay up to date

Get notified about the newest products and upcoming sales

A Little About Jared Aubel

Jared Aubel (b. 1980) is a contemporary painter who mixes classic painting techniques with elements of Pop Surrealism, Lowbrow, and street-art. Educated at Arizona State University, Aubel graduated with a bachelor degree in fine arts, specializing in sculpture.  The unique diversified course study at ASU allowed Aubel to experiment with multiple artistic mediums and techniques, leading to his skillful mash-up style of old and new, high and lowbrow. His content is usually inspired by lived experiences, night life, and eccentricities of modern society. Clever jokes and visual puns are created by layering elements of nostalgic pop culture, symbolic icons of religion and war and modern fears of the American lifestyle. Aubel has exhibited work in the gallery setting, sticker art on the street, and gained an international following for his prints through his website.